Logistics Cost as 13% of GDP in India – Meaning, Interpretation and Basis

Indian Logistics Industry is said to be 13% of GDP. One can hear this figure in almost every intellectual discussion related to Logistics and infrastructure. Many are even unaware of where this figure comes from, this gets actively cited at various industry discussions, conferences, and white papers and is interpreted differently by various ‘experts’. The poor state of Logistics in the country is a general inference after this citation. The confusion compounds when this gets linked to the transaction cost in Logistics so much so that one would find an executive in a price negotiation discussion citing this figure as if this is the basis of every transactional cost in Logistics. Many experts express their concerns over this cost being high in comparison to other countries and try discussing solutions by taking this as a benchmark cost. 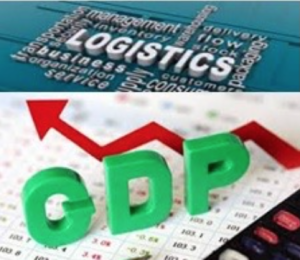 But is that a correct figure 1st and if at all, is that a right interpretation of this cost?

Incidentally, Logistics encompasses all these sectors and if carved out as a separate constituent it’ll also show up as a %age in the GDP pie. That’s how the existing

academic research work in the logistics sector tends to aggregate total logistics costs and express them relative to some economic baseline, such as GDP. But that gives an idea of only the size of the 3PL Logistics Industry in the country. And size does not automatically relate to performance i.e. bigger or smaller is better etc. The case of logistics adds to the confusion due to the fact that unlike many other sectors logistics assumes two roles in trade policy agenda ~ One is the trade-in services of which logistics is considered a separate cluster for discussions and 2nd is trade facilitation where logistics is assumed to be facilitating the trade. While the 1st represents the size of the sector and can be seen as the %age of GDP but does not necessarily tell anything about its performance and hence its interpretation with respect to trade facilitation may not be correct.

Now, lets us discuss the composition of the Logistics cost deduced as 13% of GDP ~ how did one arrive at this cost of 13% of GDP? With Logistics gaining importance around the globe, different studies have been conducted in different parts of the world to establish a comparative number to it. The methodology to deduce this figure has gone through a kind of evolution.  From a trade research point of view, the logistics costs can be measured or proxied through various approaches viz, as a %age of total firm cost, as a %age of GDP and using performance variables such as World Bank’s LPI.

The narrow definition takes into account very specific segments related to Logistics captured in datasets whereas the broad definition takes into account the ancillary segments as well in addition. India being a non-OECD country, the data taken to deduce the logistics cost in her case is based on Input-Output data of 2003-04, and the Logistics sector value-added as a %age of GDP for India was calculated as 6.42% as per ‘narrow’ definition and 18.42% as a ‘broad’ definition. The big gap in numbers is confusing and indicates that there is a lot that has been included in the broader definition of Logistics with respect to data. And it is quite possible that lots of undesired data may have been included due to the structure of the data itself.

Other leading researchers, in a paper published in 1999, computed the logistics cost for India and expressed it at 12.9% of GDP which is almost average of the values deduced from narrow, medium, and broad definitions of logistics as deduced from Input-Output data. So, this seems to be the basis of 13% Logistics cost. Though this number 13% (12.9%) is even disputed in academic circles as it seemed to have included data on passengers as well and considering that India is a populous country, the passenger movement expenditure in India would be substantial hence the dispute seemed significant.

A Few Points Emerge From This:

Watch out for this section for more on Logistics Cost and its various dimensions!

Mansingh Jaswal is the Founder Director & Chief Executive Officer of Genex Logistics (Genex LogiSolutions Pvt. Ltd.), having a professional experience of over 17 years in Supply Chain, Logistics, Transportation, and International Freight and a Strategic Management Research Scholar at Management Development Institute (MDI).
He can be reached at mj@genexlog.com  or contacted at +91981040443
Genex2022-01-27T16:10:41+05:30
Page load link
Go to Top